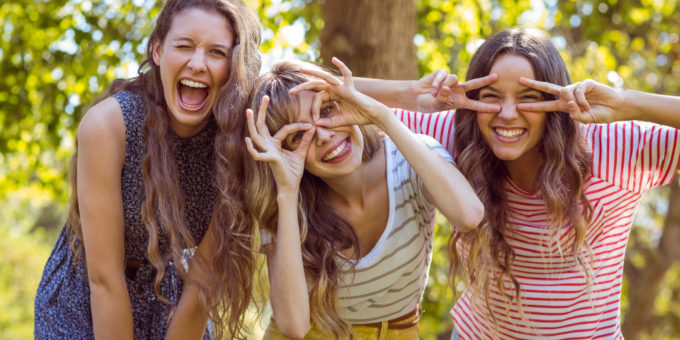 I Quit Sugar Article – Grow together, flow together? The science behind period synchronisation

Ladies, we’re sure you’ve all heard the old wives’ tale that says if you spend a lot of time with your girlfriends, your cycles will sync together.

Some of you may have even experienced it (in the office we sure have). But, turns out it may not be a total coincidence…

Back in the early 1970’s, one study published in Nature journal concluded that yep, women’s periods can sync together (phew, we’re not totally imagining it!). They put menstrual synchrony down to an unconscious chemical interaction between pheromones (hormones that work outside of the body).

But as this study was conducted on girls living in a college dorm room, it was not considered to be completely accurate. And since then, there has been no conclusive evidence on the topic.

There are however, a few other hypotheses… One interesting evolutionary perspective is that menstrual synchrony occurs to enable synchronised birthing, so that children who lose their mother at birth would still have access to breast milk, and thus increase their chance of survival.

Another theory is that women who live and work together often have similar diets and exercise routines, which could subsequently influence their menstruation.

We checked in with our experts who tended to agree that while controversial, it could all come down to pheromone interaction.

There is plenty of circumstantial evidence that our periods synchronise. It’s thought that it may occur due to our pheromones affecting our behaviour and physiology.

Fertility specialist and gynaecologist, Dr Natasha Andreadis, has also experienced this in her clinic. In fact, she explained that one woman who struggled with irregular periods and conception, read about menstrual synchrony and pheromones decided to rub forearms everyday with another woman who had regular periods. Amazingly, her period became regular and she then conceived two children!

While it looks like it may come down to pheromones, we’re sorry to say we can’t give you a conclusive answer on this one. But while researchers continue to delve into the science, let’s tackle our PMS – all together!

Read the original article over at https://iquitsugar.com/grow-together-flow-together-science-behind-period-synchronisation/